When the weather has been so nice, it’s been difficult to want to train nor practice. I tend to just want to play a round again, and again. One week, I even played 9 rounds. Also doesn’t help that Nick Starchuk is now at a private club and not really able to continue to teach as much. But it’s no excuse not to do what I need to do to best to improve my golf game.

My trainer Clance from LPS gave me a shirt the other day with the words “No Excuses” on it. It resonated with me. I think about the times I did nothing but watch TV shows on the couch, playing mindless video games, or browsing facebook. These are times, that can be so much more well spent on stretching, putting, swinging, working out, and or self improvement in business, the mind, etc.

“There might be people more talented than you are, but there is no excuse for them to work harder than you do.” Simple as that.

It’s also the words that help push me to write something ever so often.

In terms of golf, I have been doing pretty well, as my handicap has been dropping consistently from the 14 at the start of this year, to about 11 now.

Just the past Tuesday, I participated in the Golf Town NAS Tournament at Rattlesnake GC. Shot a pretty terrible 48 in the front, but came back strong with an even par 36 at the back. 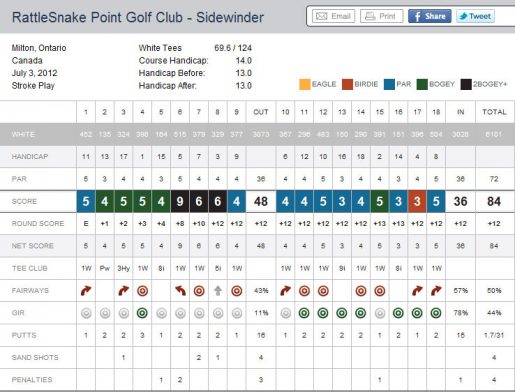 Hole 5: It’s a relatively short Par 3 at 150Y with a little bit of wind against us. I decided to use an 8i, but pushed it to the right where it took an unfortunate bounce into the rough (red stake). Couldn’t find the ball, so had to drop one, with one chip, one putt for a bogey.

Hole 6: Par 5 that was with the wind playing about 520Y. After a decent drive that went a little left, I was left with two options. 1. 203Y across the water on a good lie. 2. Layup around the water to the 100Y with a Wedge Wedge. I opted to take my 4i to hit it across the water, but unfortunately I caught the ball a little thin and it ended up in the middle of the pond. So I dropped a ball where the water starts with only about 130Y left to the hole… chunked my PW and put it 10Y into the water. Of course, dropped another to put it onto the side of the green with one chip, 2 putts for an ugly 9.

By the time, we had a huge thunderstorm that left us in a delay of play for about 45 mins. Now resuming play…

Hole 17: Topped my driver for the ball to be in the right rough. Had about 135Y in, with a 9i put it about 5 feet away. Good thing one of the competitors put his ball about 1 feet behind mine so I was able to get a pretty good read to putt it in for a birdie.

Overall, doing a 36 on the back 9 was pretty solid which boosts my confidence in my abilities. I also shot in the 70’s this year at Timber Ridge from the Blue Tees. Had a pretty amazing round there as well. See scorecard here: 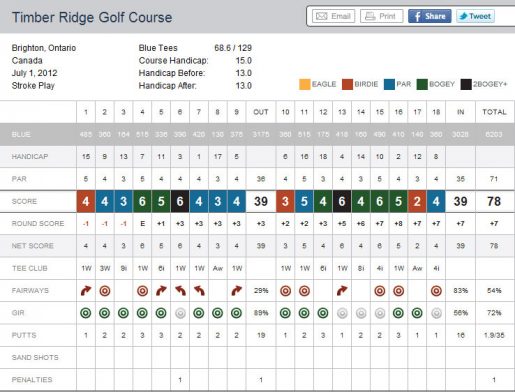 I’ll be playing the Roger Cup on Sunday, and GTA AM Tour on Monday, so hopefully I’ll bring back some good results.