Again here are some work out sheets I’ve completed during this progress with Clance Laylor @ Laylor Performance Systems. Still no abs yet 🙂 But I have gotten a lot stronger than before, and my effortless swing has been steadily increasing in distance.

With a lot of working out, comes adjustment on the swing because now that your body is stronger, something that was once harder has now become easier. Since working out and having limited time to train outdoors for the golf swing, I have been struggling a lot. I’ve lost confidence in my swing, been slicing it everywhere, and my distance was lost (my average drive was like 200, and at a vertical launch of like 20).

It wasn’t until I took some time off to review some old videos and realized that my hips and legs have been moving a lot faster than my upper body. Meaning, on the moment of impact, my back foot has almost completely made the full turn and lifted causing my arms and hands to have no chance of squaring up the club face and club path. It took me a while to notice this, almost had to pause frame by frame of what I am currently doing vs what I was doing before, and compare it with pro videos on Youtube/V1 Swing Analysis.

Another thing I have been working on is figuring out where I need to be at the moment of impact. My hands should be more forward with a forward shaft lean, and with this, sometimes I will practice holding that finishing position and swing with that just to grasp that feeling.

But after taking some weeks to practice, my shots now are finally coming back and the distance has been gained again. My average drive now would be in the 240-265Y with roll depending on how solid I hit it of course. I’ve driven it to the green once at a Par 4 292Y with the wind (GPS Laser Finder Confirmed).

Right now, I focus on making that swing and than the back foot comes off the ground after the impact. Based on the AboutGolf system, my swing path has been a straighter, and the club face has been more squared now.

Anyhow, enjoy the work out sheets, don’t hurt yourself. Keep you guys posted when I’m done the next workout Sheets. If you got questions, post and I’ll answer. 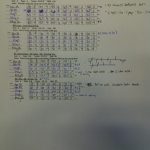 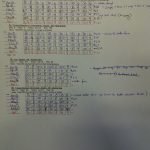