Best weather conditions this year by far, minus the heavy winds. Today, at Brantford Golf & Country Club, my friend Cyril Ma cadied for me. Although, we had both never played this course before — with a carefully marked pin sheet, GolfShot GPS, Bushnell Range Finder, and the course layout card … we managed.

Couple of things I’ve learned are the amount of yardage you have to add on a certain level of uphill. I’ve mainly guessed most of the time based on if I felt like it was 10 ft above my ball level, I used to just club up about 3Y-5Y, but Cyril proved to me that it is a little more than that… the exact calculation I’m not sure but I’ll have to Google it up later about the percentage. Wind also is another factor that I used to just guess and pray that I was right. Today, we probably did the same thing, but we had the experience of two golfers guessing 😉

I came in 3rd place, full scoring of the entire field here: http://www.gtaamateurtour.com/Statistics/TournamentResults/32/260

I will go over some highlights..

Overall, with Cyril’s help, I didn’t always hit driver off the deck and get it as far as possible, he helped me put it into positions where I had a better chance at the green and better lie (if executed properly). Only thing that really ruined my round was the execution and my putting. The greens were fast, and then slow, then fast, then slow again. As you can tell, I had 5 x 3 putts, which I think is quite unacceptable.

Hole 2: Opted for a 3W off the tee because at 250-260Y there were bunkers on both side, so something just short of that would be ideal since it was a short hole. We ended up with about 110Y in or so, two putt for par.

Hole 5: The hardest hole on the course.  Measuring at 437Y against the wind Par 4.  I knew I had to poke it out there in order to be able to reach in two.  Silly me, while trying to use everything I got to hit it, I topped the ball and it went about 130Y to the left deep rough.  From there, I was in no position to even attempt to bend the ball left towards the pin (300Y away).  So Cyril and I decided that we would just pitch it low with a 7i to the fairway and leave ourselves with about 140Y or so to the pin.  Unfortunately, with the thick lie, and pretty much stepping in soggy water grass, I chunked the ball a little.  The ball did end up in the fairway, but we were 160Y away.  Wind is in our faces, hairs blown back, Cyril handed me a 6i and said, smooth swing (usually 180Y club).  I hit the ball pure, straight at the pin, and landed it pin high, rolled to the right about 6 feet from the pin.  The putt was slight right to left putt (about one cup right of the hole), good speed, drained it for a par.

Hole 9: 5i put me on a flat level (about 195Y) with only 75Y left to the hole. I caught my LW a little heavy leaving myself off the green short. One chip to about 3 feet, two putted.

Hole 12: The placement of this hole wasn’t really at the 461Y marker. Drove the ball to about the 140Y, with the massive uphill, we hit an 8i into the green pin high, but a little right so ended up near the rough mound. One chip, one putt for birde.

Hole 13: 429Y against the wind was probably one of the toughest hole that day. Teed off with a driver, leaving myself about 180Y left to the pin. We had to play it like about 195-200Y, so with a 5i, I flushed and it went straight at the pin leaving me about a 12 ft putt for birdie. 3 putted.

Hole 14: I mis-hit my tee shot and it went 30Y left and about 20Y forward into an unplayable lie. So I declared unplayable, and then I hit 3 off the tee. Then pretty straight forward after for a double bogey (par if not for the penalty) 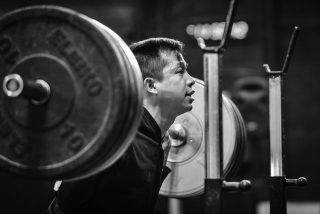 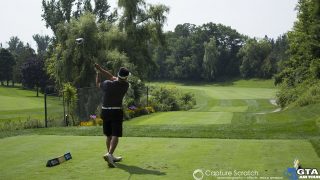