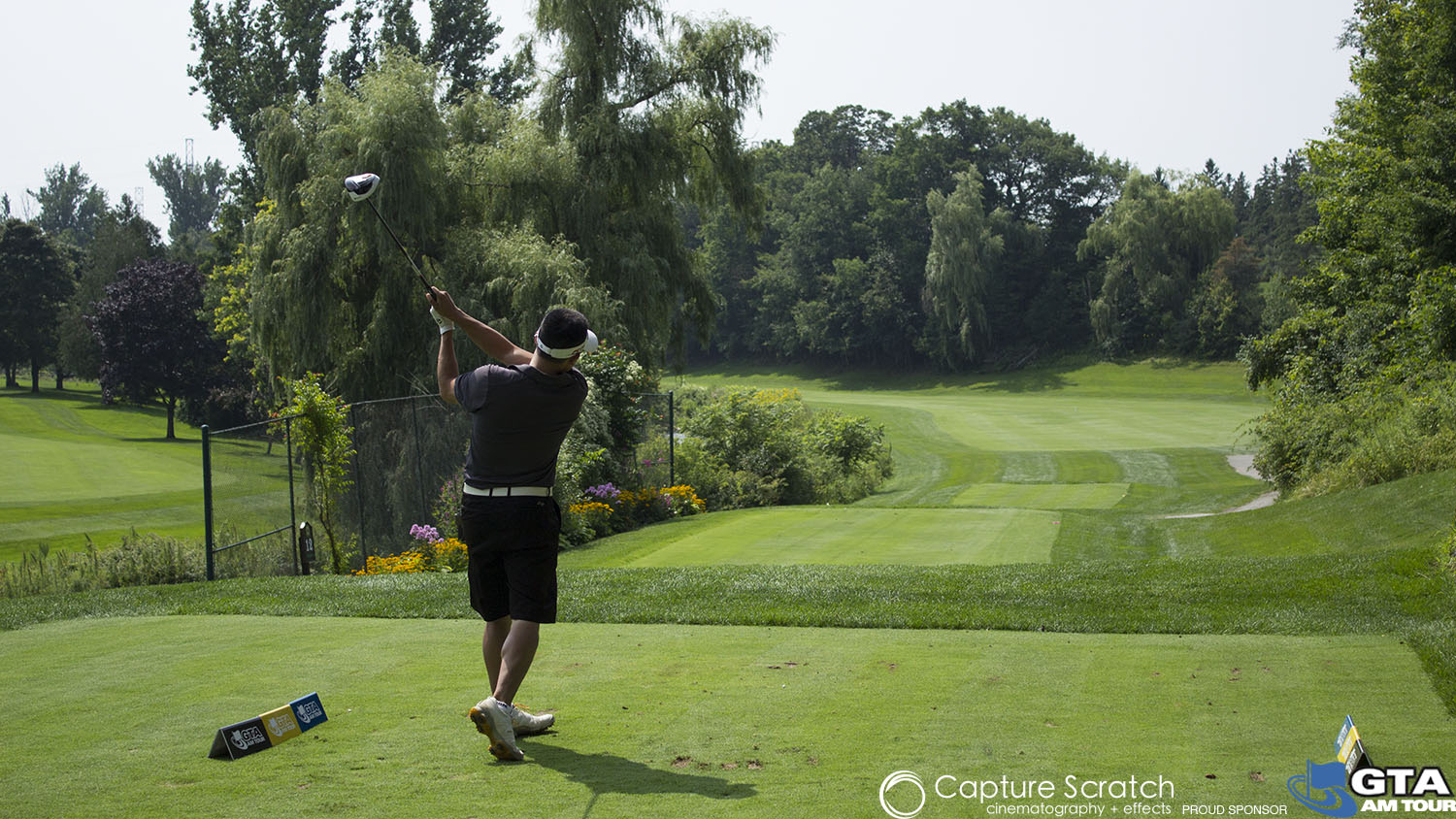 Scarborough, ON (August 11, 2014) Today, the 15th event of the GTA Am Tour season was played: The Ultra 94™ Classic hosted at the historic Cedar Brae Golf & Country Club. A field of 75 competitors would compete on the scenic and challenging Cedar Brae G&CC, a par 71, 6,521 yard layout that winds lazily through the beautiful Rouge Valley with picturesque fairways, healthy and fast greens, and all world natural beauty. Cedar Brae is an outstanding private golf facility and is no stranger to hosting competitive events and major golf Tour Tournaments, including the LPGA, Canadian Tours, Provincial Championships and GAO qualifiers. We would like to thank todays sponsor Ultra 94™ for their support of the Tour and for being on hand to present awards to today’s winners. And, for the Tour players competing today, they would all have to summon their inner Ultra 94™ power, something that would offer them high performance, even under tough conditions Cedar Brae would offer. For those that were able, they would take home The Ultra 94™ Classic and a $250 Ultra 94™ preferred pricing gas card for their performance.

In the Championship Flight today, after winning last week, in a nail biting playoff, to capture his first event on Tour, Colin Mathers (Toronto, ON), would make it back-to-back victories and notch another win, having played an outstanding round today. Colin, playing in only his third Tour event, made it a good one, having played a round of near perfect golf playing Cedar Brae with a steady hand to card a one over par 72 scoring two birdies, thirteen pars and three bogies. Alone, in second, returning to competition today in great form having taken the past few weeks off, Jay Skukowski (Toronto, ON) would score a round of 82 to earn his third top three finish of the season. To determine third place, card matching was required, as three players would be deadlocked with matching rounds of 83: Ken Soulliere (Whitby, ON), Championship Flight Myrtle Beach Order of Merit Leader, John Harrington (Ajax, ON) and Tour Sponsor and competitor Joshua Kingsmill (Toronto, ON). When matching the last nine holes, all players involved would remain tied having all scored 42. When matching the last six holes, a winner would emerge, with Ken scoring 28 to take the third place prizing, with John scoring a 29 and Joshua with a 30. The Championship Flight’s Myrtle Beach Order of Meritsees only a small change this with John Harrington padding his lead to 282.5 points for his third place finish to now sit with 810 points. In second place is Stephen Wright, with 527.5 points and, in third, is Robert Genno (Washago, ON) with 525 points.

In the A-Flight, coming off an interesting third place finish last week, Zack Kilislian, would make it easy and less stressful on himself this week. Zack played both nines with a steady hand, not finding the troubles he experienced last week, and would finish his day with nine pars, three birdies, five bogies and one double to capture his first win on Tour, finishing his day with a round of 75. Taking home second place prizing was Sentilar Sebastian (Toronto, ON), who would finally score the round he has been gunning for all season on Tour having carded a round of 77, to give him his first top three finish of the season. Alone, in third, taking home some Mill Street Beer and TaylorMade golf balls for his efforts, Chris Peixoto, who has already found success on Tour this season winning The Privplay Open back in June, finished his day with a round of 79. The A Flight’s Myrtle Beach Order of Meritsees no change week over week as all three holding down the top three spots took the week off. Shavi Kahlon holds down the number one spot with a lead of 147.5 points, sitting with 572.5 points. In second place is Darryl Scott with 425 points and, in third place, Matt Ward has 410 points.

In the B-Flight, Tour sponsor and competitor, Jeremy Choi (Toronto, ON) would capture his second win of the Tour season, having won last month at the Mazda Major. Jeremy had another fantastic day, scoring an 81, but it was not without its troubles. Jeremy would start off firing on all cylinders, going out on the front nine with a low score of 38. The back nine would present its challenges and Jeremy would muddle through the back nine, going double bogie on ten and then five straight bogies to close out the final three with par, birdie, bogie for a back nine of 42. With this victory, as per the Tour’s Battlefield Promotion policy, Jeremy will now be joining the ranks of the A Flight for the remainder of the season. After struggling in his first Tour events of the season, Jeremy has found success twice in the past month, finding his groove. He did so under the watchful and expert tutelage of Golf Coach Liam Mucklow from The Golf Lab. We wish Jeremy the best and continued success in the A-Flight. Alone, in second, was Mark Armatage (Barrie, ON) who would turn in a solid round of 83 giving him his third top three finish on the season but, for the first time this season, Mark would take home a new TaylorMade putter for his efforts. To determine third place, card matching was required, as two players would enter the clubhouse with matching rounds of 85: Serge Marchuk (Brampton, ON) and Jeff Gatcke (Lansdowne, ON). The result of matching the back nine scores would see Serge capture third place, posting a 43 on the back over Jeff’s score of 46. In the B-Flight’s Myrtle Beach Order of Merit, Michael Cann, continues to hold down top spot with 605 points and continues to have a commanding lead of 150 points over John Farrugia, who sits in second with 455 points. Jumping up one spot, to third place, is today’s second place finisher Mark Armatage who sits with 422.5 points in the Order of Merit.

In the C-Flight, and in weird and wonderful twist of fate, the final grouping in today’s event would play to a first and third place finish. Jay White (Huntsville, ON) and Ian Lederer (Toronto, ON) would experience one of those exciting see-saw battles over the eighteen holes, with neither one expecting a good finish because of what would transpire as their rounds wore on. Both would match their outward nine scores with scorching 39’s but, as the round wore on and air temperatures rose, so would their scores, as they both began to fade under the heat of the day. The back nine would go the exact opposite of the front nine, where it would be a comedy of errors, as shots on the front seemed to find the fairway, however on the back they all headed towards the tree line. If it was on the green on the front, it was to the beach on the back. When they would reach the clubhouse, weary and fatigued from the extra strokes on the back, Jay would finish his day with a score of 89, having shot a 50 on the back to best Ian by one and, to his astonishment, was good enough for the win. Ian would finish his day with a score of 90 and, with Bob Luckwich (Toronto, ON), past Tour staffer, already in the clubhouse having posted a score of 90, card matching would be require to determine second and third places. The result of matching the back nine scores would see Bob taking second place, having finished the back in 45 to Ian’s 51. Ian would take home third place for his efforts. The C-Flight Myrtle Beach Order of Meritsees no change week over week as Bob Sikorski still holds on to top spot, maintaining his lead by an impressive 290 points with 737.5 total points. Krish Nair continues to sit in second with 447.5 points and, in third, Clayton Mackay has 405 points.

Another one of the many ways to win on Tour is through Net Score competition. The net score competition is based on the net scores of all the players who did not place in the top three gross winning positions in their respective Flights. The top two net winners at each event receive one dozen TaylorMade golf balls and one case (24) of Mill Street beer. This week’s winners were Rob Olivier, with a net 68, and Mel Simon with a net 71. In addition to the season-long Gross Score, Myrtle Beach Order of Merit, players will compete for a parallel season-longNet Score Order of Merit. After 15 events, Mark Matusiak continues to hold down top spot with 612 and, in second, Michael Cann has 582.5. For complete standings click on the link.

Another new addition to the 2014 Tour prizing is an opportunity to win a $20 Ultra 94 Preferred Pricing gas card. A per-event draw will take place from all players who fire a score of 94. The winner of the Mill Street Brewery Challenge, Ultra 94 $20 gas card was Max Osuszek of the A-Flight.

The Ultra 94 Classic at Cedar Brae was the last event for Adam Honsberger from Honsberger Physio. He is leaving The Tour (temporarily) to attend Registered Massage Therapy School. We want to thank him for his wonderful contribution to The Tour and would also like to wish him the best at school!

Click here to view THE RESULTS from today’s event The Ultra 94 Classic played today at Cedar Brae Golf & Country Club. Also, to see all the actions from today’s event check out these GREAT PICTURES! Courtesy of our Tour Sponsor Capture Scratch. We hope you have a chance to check them out and download them for FREE!!

The GTA AM Tour is very busy the next two weeks with four events remaining before the BMO World Elite Fall Swing starts. It all starts with Lookout Point Country Club next Monday August 18th for the LG Classic. Tuesday, August 19th the Tour will be at Dundas Valley Golf and Curling Club for the Nature Valley Open. The following week, the Tour is at Oshawa Golf & Country Club on Monday August 25th to play The Bright Blue Wave Challenge followed on Thursday, August 28th for The Cellworks Masters to be played at Beverley Golf & Country Club. Space is still available at all events, sign up today!